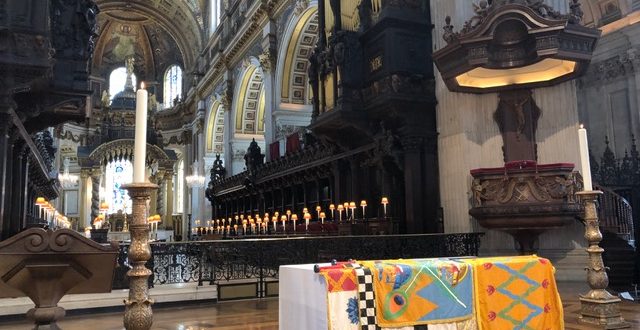 Sir Ewen was Patron of the Society, the first British Ambassador in France to be so. He was Patron from its launch at the Inaugural Annual Colloqium in Paris September 1990.

On the 28 June at St Paul’s Cathedral he was remembered and his banner laid up on the 200th Anniversary of the Order of St Michael and St George. The Sovereign of the Order is Her Majesty The Queen and The Grand Master, HRH The Duke Of Kent. The President, Judge Ian Forrester, and the Society were represented by Simon John Horsington, Vice-President d’Honneur, founder.

The Society is fortunate to have the continuing support of the present British Ambassador in France Lord LLEWELLYN of Steep. He welcomed the Society and its guests at the reception at Les Invalides after the highly successful 6th Maritime Colloquium held this year at the Secretariat General de la Mer on 25 June 2018.

Sir Ewen Fergusson’s Banner was laid up at the Service of Dedication and Remembrance on the altar under the dome, at St Paul’s Cathedral, City of London.