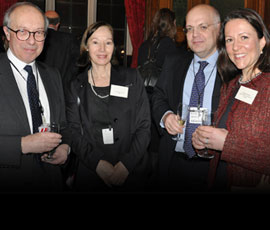 The Franco-British Lawyers Society’s UK Academic Prize was awarded this year to Queen Mary, University of London for the innovative LLM progamme that its Centre for Commercial Law Studies (CCLS) recently launched in Paris.

The award ceremony took place during the Annual Reception of the Society, hosted by Lord Hope of Craighead, Deputy President of the Supreme Court on behalf of Sir Michael Tugendhat, President of the FBLS, at the House of Lords on 2 8 January 2013.

Lord Hope of Craighead who presented the award to Dr Maxi Scherer , Director of the Queen Mary Paris LLM said that the LLM was an exciting programme and precisely the kind of project that the Society wished to promote as it would give young French and British lawyers the opportunity to work and study alongside each other.

Dr Maxi Scherer said : « I am very honoured to receive the prize and we are delighted that the LLM progamme has received such a great distinction, honour and encouragement ».

Professor Spyros Maniatis, Director of CCLS, added : « In developing the programme, we have placed great emphasis on working closely with our French partners and this award recognizes CCLS’s international and comparative approach and commitment to further cultivate our continental links

Dr Vivienne Forrest, Academic Director of the FBLS, underlined that the newly launched Queen Mary Paris LLM would most certainly help to develop and enhance Franco-British legal relations as it would enable lawyers, law students and academics from both sides of the Channel to work together, understand and appreciate both the common law and the civil law legal systems and the very different methods of legal reasoning on which they are based. She said that the FBLS was particularly pleased to award the prize to Queen Mary, University of London because of the innovative comparative and international perspective that the Queen Mary Paris LLM gives to law studies.